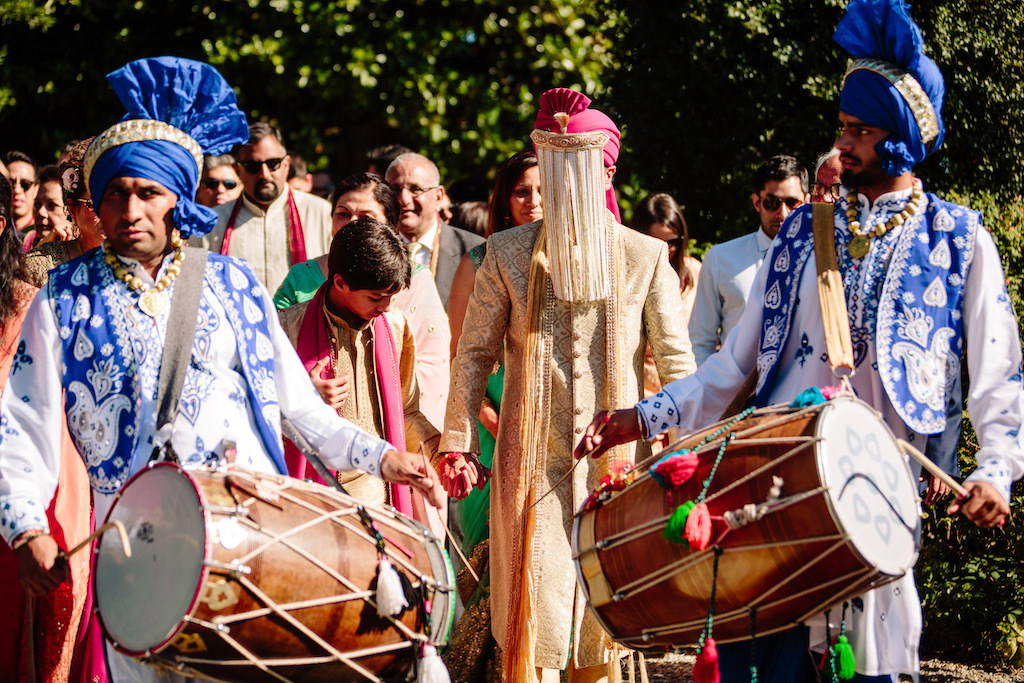 We’re back with more wonderful Indian wedding traditions & customs we love! The journey of an Indian wedding is complex, spiritual, and rich with symbolism. We hope you enjoy part two as we conclude the festivities. 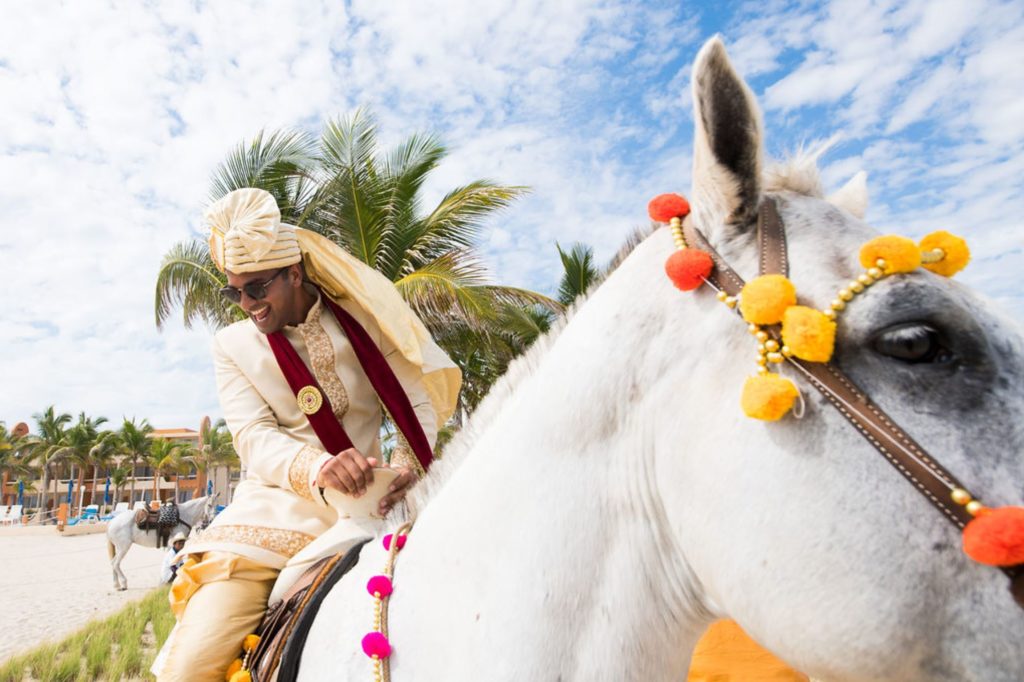 Let’s start with some love for the groom. In western weddings, the bride is considered the guest of honor, and the groom, although he may participate in the planning, is more of a guest. In the Hindu, Muslim, and Sikh Indian cultures, this is not the case. The vara yatra or Barat is the singing and dancing processional, as the groom, his family, and friends navigate their way to the wedding ceremony. The groom may be on horseback and, in some more elaborate cases, on an elephant! During the Barat, rice is tossed known as akshat, like in western wedding tradition. But in the western tradition, rice is tossed during the recessional. In these days of social distancing, we think these mini-parade Barat processionals will be quite long!

During the Barat, as the groom is approaching the venue, he is handed a plate holding a lighted lamp or arati. The light is meant to illuminate the couple. This ritual is found in almost all Hindu celebrations. The tilak, or dot on the forehead, is placed on the groom during these festivities! 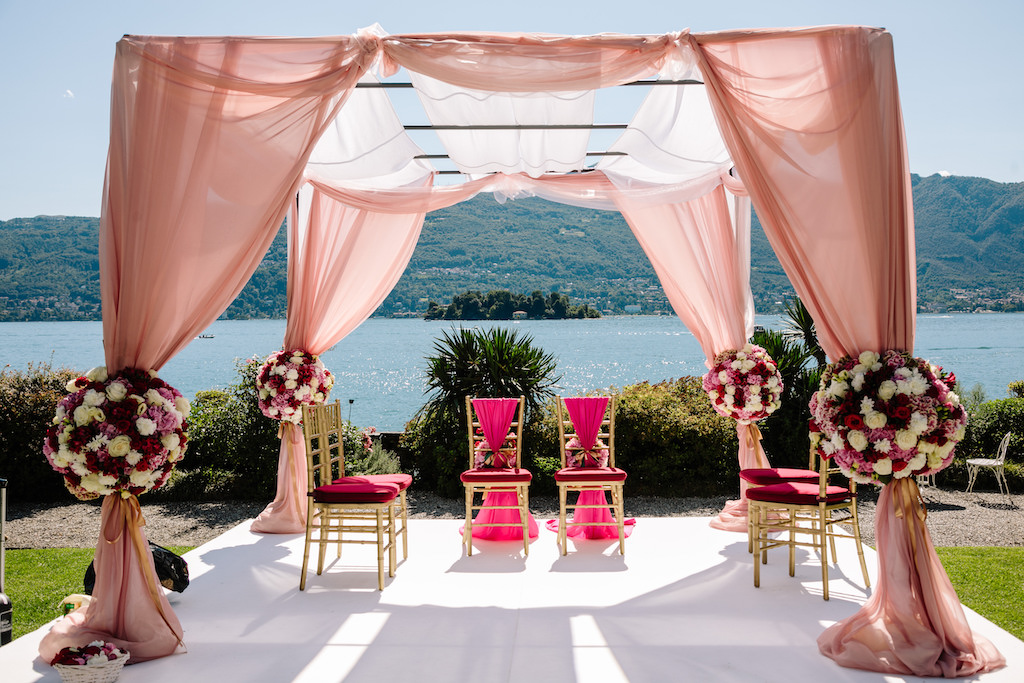 After all of these incredibly rich and colorful Indian wedding traditions and customs we’ve been sharing, the moment has finally arrived! The wedding ceremony! The ceremony takes place inside a 4-pillar structure called the Mandap. It serves as the altar, similar to a chuppah in a Jewish wedding ceremony. The decoration of the Mandap is another opportunity for the couple to be expressive with their design aesthetic. Draping, flowers, crystals, elaborate furniture, and other elements are adding to the grandeur. The four pillars signify the four Hindu Vedas (philosophies): Brahmacharya, evolving into Grihastha, Vanaprastha, and Sanyasa and further, the four aspects of human life: Dharma, Artha, Kama, and Moksha. Marriage is a serious undertaking, and entering into the covenant of marriage is a 360-degree amalgamation of this world and the next.

The pre-marriage lifestyle of sexual abstinence

Head of the household

A sense of purpose

We’ve written about the attention to detail, adornments and wardrobe, of the bride-to-be in Indian wedding traditions and customs in part one. But there is even more to share! 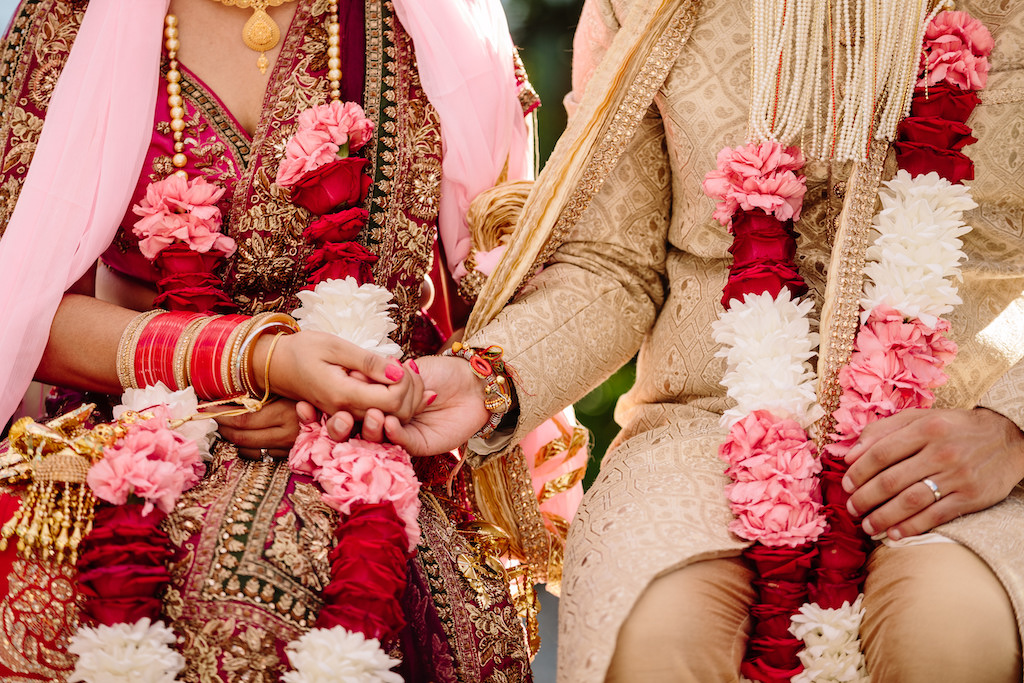 Who doesn’t love jewelry? The Indian wedding tradition of the bride wearing bangle bracelets made of glass, gold, or other metals signifies the long life of the husband, good fortune, and prosperity. It’s doubtful you will ever see an Indian bride without armfuls! And toe-rings are also popular! Worn on the second toe and typically made of silver (a known conductor of energy), the energy of the earth is said to flow directly to the heart.

As we’ve noted throughout these two articles, every step of the way from engagement to the marriage ceremony is significant and filled with customs and traditions. Incorporating each step is an homage to the past and future. Under the Mandap, there are as many as eight meaningful and purposeful inclusions, all starting with a prayer to Ganesha:

He is the god of beginnings and good fortune. He is the remover of obstacles. Prayers are chanted to pave the way for a happy, healthy, and prosperous married life.

The floral garlands aren’t just decorative at an Indian wedding. They signify pleasure, long life, and happiness and are exchanged by the bride and groom after the prayer to Ganesha.

Fire burns in the center of the Mandap symbolic of purification. The couple walks around the fire, tied to one another (the groom by his sash, the bride by her veil). Depending on the part of India the couple is from, they circle from four to seven times. This Saptapadi is symbolic of the four aspects of human life: Dharma, Artha, Kama, and Moksha listed above.

This is the necklace (translated to mean “holy or auspicious thread) the groom ties around the bride’s neck, which indicates she has transitioned from a single to a married woman.

After the groom ties the mangal sutra necklace on the bride, they each shower one another with rice mixed with saffron & turmeric called Talambralu. Now the guest’s anticipation climbs as the ceremony is coming to a close.

The groom applies red powder to the bride’s hair, down the part. This tradition is specific to married women only and said to symbolize a woman’s desire for her husband and his longevity.

A Ring Ceremony may also take place before the conclusion of the ceremony.

And finally, the culmination of all the celebrations before the wedding reception begins. The formal farewell the bride gives to her parents. She is now a married woman and will reside in the home that she and her husband will share. “Home” does not always mean a separate dwelling. It does mean, however, that she is starting a new life, and she and her husband are an offshoot of their two families, creating a new family of their own. Throwing handfuls of rice and coins are the transition from leaving her parents to joining her husband for a lifetime.

Have you attended or hosted an Indian wedding? We’d love to hear about it!

Check out the beginning of this beautiful story.

Family, roots and sentiment are the foundation of rich wedding traditions that have survived and been celebrated generation to generation. Can you find something you’d like to include in yours that you haven’t thought of? Choose from this wonderful list.

Villa Venues For Weddings in Times Of Social Distancing